A View Into the Kitchen, a Breakfast Casserole, and a Company Dessert 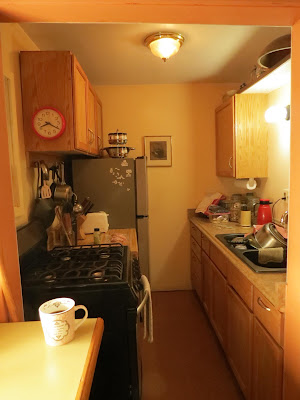 The kitchen in our old farmhouse is very small. In the photograph above, you are looking through the doorway (there's no room for a door) into the kitchen. Three or four steps, depending on the length of your stride, would take you from the sill to the back wall, and from side to side, there's no need to take steps -- just turn from sink to stove. Because it is so small, I call it my Paris kitchen, and I've written on my main blog, Books in Northport, about how I started calling it that. 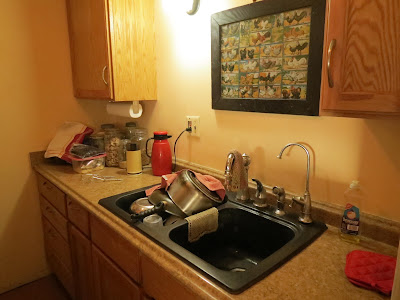 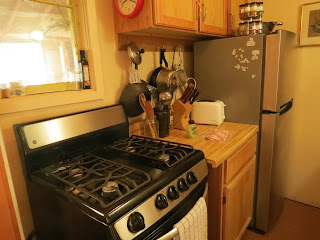 Despite the modest size of the kitchen, I finally treated myself to new appliances in 2015. Our brand-new refrigerator has a separate door for the freezer! The brand-new stove has a working oven! My new kitchen appliances are larger and more modern than the ones Julia Child had in Paris, and I'm no Julia Child, so they are all I need for the rest of my life.

The package on the counter above -- can you see it? -- is organic bacon from "the meat lady" at our summer farmers market. Below is the same bacon sizzling in a pan, and beneath that is the breakfast casserole I put together on Sunday morning for my visiting mother and sisters. 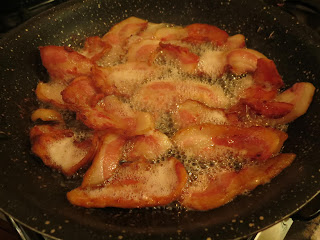 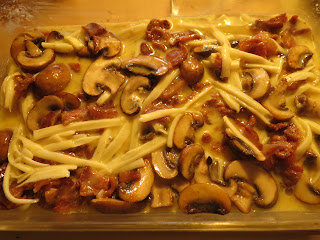 Sadly, I completely forgot to photograph the casserole when it came out of the oven. Sorry! 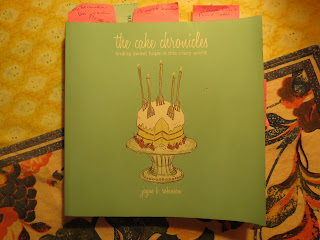 David often asks me, when I bring dinner to the table, "Did you take a picture of that?" and I wave away the suggestion. During my family's recent visit, however, following a recipe from Jayne Robinson's The Cake Chronicles, I thought photographing my attempt at different stages might not be a bad idea -- and, in fact, I had done so last year, when making another recipe from the book, and when I became convinced that I needed an electric mixer: my fresh tomato cake last year, batter beaten by hand, while delicious, was just not as light as a cake should be.

For this year's family reunion dessert, I decided to make what Jayne Robinson calls a Michigan sour cherry pudding cake. My mother and sisters and I agreed that we would call it a Michigan sour cherry custard cake, as the milk and cream and eggs deliver a texture and flavor more like custard than either pudding or cake. French Regional Cooking, by Jean Ferniot, another book I consulted, gives the alternate English/American name as cherry flan. The cherries I used were organic Balatons, and I pitted them hastily before freezing, racing the fruit flies, which explains the appearance of the dessert, both in process and in finished form. 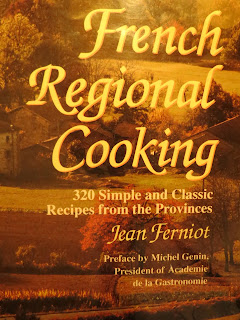 My cookbook of French regional recipes calls this by its traditional French name, clafoutis. It's a specialty of the Massif Central region of France, where I fell in love with the old province of Auvergne, though this recipe comes from the Limousin. Both Jayne's recipe and the French cookbook recipe call for 1/4 cup of heavy cream, but then Jayne uses 3/4 cup of milk and three eggs, while the French leave out the milk entirely and use eight (8) eggs.


But I did it Jayne's way, and that was a sufficient number of eggs for us. It also let me use whole milk from Shetler's Dairy. The great thing -- a bonus -- about needing heavy cream for the batter was having the remainder to whip for dessert topping. As for the hard stuff, French Regional Cooking called for kirsch, The Cake Chronicles for cognac, but I used Redbreast, because it's what I had on hand, left from a sister visit in August.

The cherries were pitted a few weeks back on my front porch, and my family and I enjoyed our dessert this past weekend on the front porch, but the dessert itself came out of my own little Paris kitchen. It tasted even better than it looked. 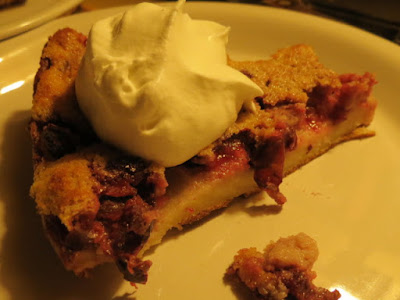