Here’s a sad truth: I have not been back to France since the adoption of the euro. Another truth, not sad at all, to my mind: I have never in France during the winter. Spring, summer, fall, yes. Never winter.

The street markets, like the one on the rue de Buci, and all the little food shops that spread out onto the sidewalk along the rue des Martyrs -- what happens to them in the winter? I never thought to ask. Who can tell me?

On my first visit to Paris I rented a room for a month and was charmed by every little thing I encountered. The landlady’s hand-lettered sign on the apartment door: “Attention au chat,” for instance. With my love of the French language, it didn’t take much to put me in raptures. Another example. Space had been cleared for my things in the closet in my room (you see what a luxurious apartment this had once been, in that it had closets), but up above, on shelves, were large cardboard boxes marked “Vêtements d’été” and “Vêtements d’hiver.” My landlady (who became a dear lifetime friend) would have been astonished had she known how many times I smiled at those boxes and quietly whispered to myself the magic phrases (“Summer clothes” and “Winter clothes”).

Little things. Another dear friend, with whom I have exchanged only handwritten letters for almost thirty years, occasionally encloses in her letters a page from her daily Zen calendar. The last one she sent was from January 18 and reads: “Blessed are they who see beautiful things in humble places where other people see nothing.” It went along with a little pep talk she had given me in her letter. Sometimes I need a pep talk, especially in winter, a season that often finds us, here in the old farmhouse, “down to seeds and stems,” as I used to say until someone told me that was a drug reference. Now I say instead, “We’re eating our seed corn.” The image is different, the reality no easier. But I do find comforts in my little farmhouse kitchen, my Paris kitchen, as I call it, and I love being able to bring comfort from the kitchen to the farmhouse table.

Garlic, ginger, and shallots. Those are certainly little things, but they pack a punch, especially the garlic and ginger. Shallots are more delicate and deserve to be showcased rather than overpowered by stronger flavors. I won’t be discussing them further today but couldn’t resist photographing them with the heads of garlic.... 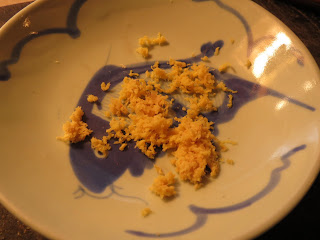 Here’s a tip: If you keep a gingerroot in the freezer and only take it out when you need fresh ginger, you’ll find it easy to pare and grate. Take from the freezer as well some of that garden squash you harvested, roasted, and mashed before the snow began to fly. Ginger will perk up the squash like magic, along with cumin and curry powder. (Spice jars and tins – more wonderful little things!) Finally, either chicken broth or coconut milk or some of both turns vegetable and spices into a beautiful and warming dinner starter.

Other soups are a meal in themselves. One evening while preparing that night’s dinner I also made meatballs with fresh-ground Italian sausage, bread crumbs (homemade honey whole-wheat bread), egg, and I forget now what-else. Put the meatballs on a cookie sheet, spaced so as not to touch, and baked them in the oven instead of using a skillet, in order to have time and space to continue the more imminent meal. Intended for a future meal, they could have been frozen, but this time I put them in the refrigerator to use the next day.

The following day, however, I did go to the freezer for scraps of vegetable ends and peelings and leftover chicken bits to simmer in water with onion and garlic for hours, making a good broth. 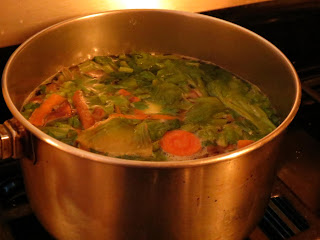 Late in the day -- limp, soggy vegetable matter moved on to compost collection -- I added diced tomatoes and rinsed cannellini beans to the broth and sprinkled with herbes de Provence. (Cooking in stages means being able to clean up as one goes along, very important in the small kitchen.) A generous handful of farfalle (bow tie pasta) I cooked separately in water, then drained and tossed back into its pan with a little bit of olive oil.

The addition of Italian sausage meatballs and farfalle gave the finished soup a hearty winter heft. When one broke into a meatball with a spoon, new flavors were released into the broth, and all the little things came together in a most satisfying way. And two or three meatballs per bowl of soup suffice, so a single batch of meatballs will stretch over at least three meals – more, if you live alone. 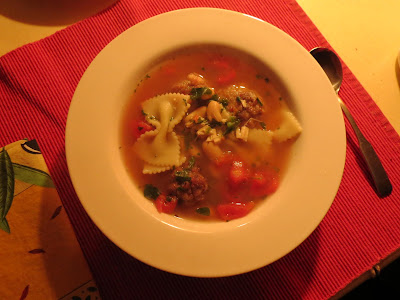 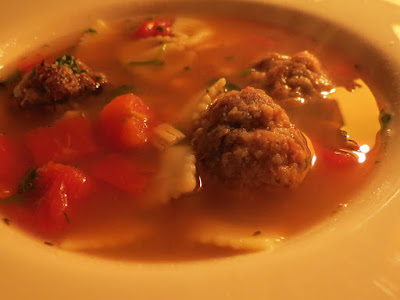 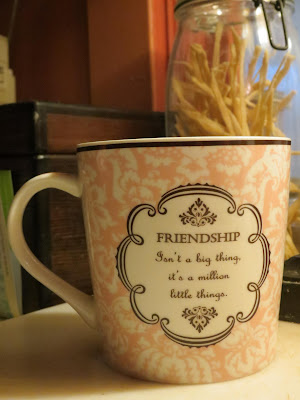 Warning: This is Not a Recipe!


If someone, your teacher maybe, ever asks what “irony” or “being ironic” means, you can say it’s when a squirrel says, “our friend, the hawk,” and you will be right. - Lynn Rae Perkins, Nuts to You 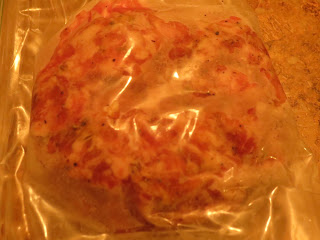 How often does the cook in the tiny Paris kitchen have a full-blown dinner plan? In my kitchen, where I’m the cook, rarely, but I usually have some kind of rough starting place, and last Saturday evening the basic ingredient was ground sweet Italian sausage. Earlier I’d had other ideas, plus salad and side dish possibilities, but then left Northport and hurried home without a trip to the grocery store.

I decided on meatballs and began by cubing up three slices of homemade potato bread. Chopped onion, a couple of eggs, handful of rolled oats, bread cubes, Italian seasoning herbs from a bottle (where did that come from?) and freshly ground pepper went into the bowl with the sausage. To firm the mixture up a bit more, I sprinkled in brown rice flour ... mixed ... added a little more flour, then formed the mixture into balls and rolled them gently in rice flour to coat them lightly. Nothing was measured first, and I hadn’t even pulled a cookbook off the shelf. 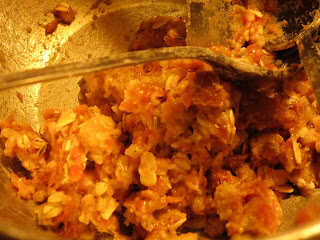 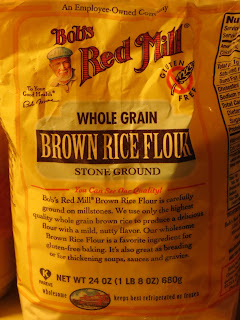 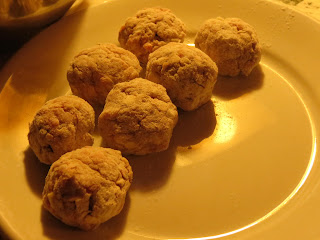 Into the fridge. Time for a break.

Now here is the irony promised by my opening quotation: While I was making up this dinner main dish as I went along, looking to see what I had on hand and snapping a shot now and then with my camera, a food show on NPR, almost at my left elbow (space being limited), was featuring a guest talking about food blogs and how recipes are absolutely critical and how the only someone who repeatedly tests a recipe can be trusted! Forget the visuals, said the guest, it’s the testing that counts. She gave that advice after noting that many people seem to get discouraged – actually suffer physical anxiety – from seeing too much perfection online.

Well, then, I’m just going to go right on posting a few pictures from time to time, because no one need fear perfection in or from my little kitchen! In fact, I want to say, clearly and emphatically, this is not a “food blog.”

I don’t put myself forward as a chef or wannabe cookbook author. I’m only a small-time bookseller, living out in the country, working out of a tiny kitchen, and trying to keep myself entertained and at the same time keep myself and my husband in good enough spirits to get through another northern winter. Don’t, for heaven’s sake, look to me for recipes! Make things up yourself, if you’re adventurous, and if you’re not, use a cookbook or other recipe source you trust.

Pressure? Stress? Sometimes things work out great, other times a little less than great. Big deal, that’s life. But hardly a matter of life and death.

Thus summarily dismissing blogging concerns, my next question concerned mushrooms: should they be combined with good garlicky chicken broth from last night’s dinner for soup or added to the meatballs? -- After browning the meatballs, that is, and putting them in the oven to take care of themselves while I steal some more reading time.

Decision: meatballs in greased pan, sauteed mushrooms strewn casually on top, broth over all, and into the oven with the entire dish. So many weighty executive decisions before darkness falls on another winter day! 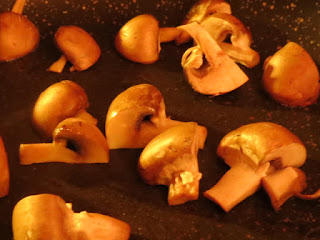 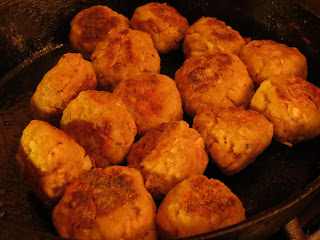 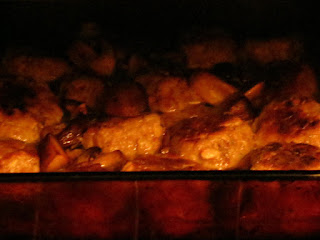 Reward: another welcome break, off in a larger room.

“Did you take a picture of that?” David asks frequently when I bring plates to the table. I tell him I don’t photograph everything we eat. “Why not?” he asks, when the plates look particularly colorful and appetizing.  Because this isn’t a job. (It doesn’t pay a cent.) It isn’t even a hobby. It’s just life chez nous, and sometimes I feel like sharing it, and other times I’m not in the mood.

So when I do share, like today, pretend you’re joining us for dinner, why don’t you? Or leave a comment to tell me what you made in your own kitchen, large or small, on the last Saturday night in January. 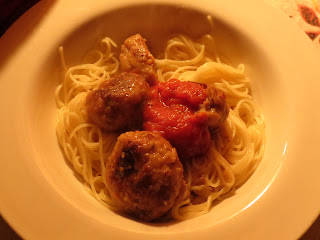 A little contact across the miles helps a lot at this time of year.
Posted by P. J. Grath at 7:12 AM 2 comments: