What To Do When Restaurants Close: Savory Sweet Potato Pie

One of my sisters in Illinois told me that as of Monday, 16 March, 2002, all restaurants in the state will close for a minimum of two weeks. Governor’s orders. I guess the situation will be reassessed as the two-week deadline approaches. “Chicago? Restaurants in Chicago?” the Artist asked, disbelieving and aghast as, for the first time, it occurs to him that travel back to Michigan could be more difficult than usual. I’d already been mentally reviewing road food provisions for the trip, still a month and a half in the future — the unforeseeable future, as it now appears, more and more.  I mean, all the sidewalk cafes in Paris are closed!

Travel aside, what does one do when restaurant dining is not an option? Most of us eat at home as a general rule, anyway, saving restaurant meals for special occasions. And haven’t we all been stocking our home pantries against the possibility of being on “lock-down” (as one friend calls it) for a minimum of two weeks, in case of quarantine? Obviously, if under absolute quarantine, we would have to eat all our meals at home.

I’d already been thinking of making a list of Things to Do (in general) when “going out” is not an option and exercised a few of them during the day: walking the dog; photographing the first spring blossoms; reorganizing under-counter cupboards; and pruning back a mesquite I’ve been wanting to prune for over a year and could finally get at, thanks to a recent thrift shop purchase. When I idly mentioned the idea of making, one of these days, a savory — not sweet — sweet potato pie, however, the Artist was instantly on board and began questioning me as to the list of ingredients. Garlic, I told him, and spices. Onions? Bacon? he inquired hopefully. Just a smidgeon of bacon, I agreed. Onions, of course. 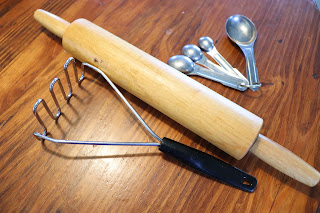 None of the recipes I could find, in cookbooks or online, exactly matched the idea in my head, so I made my pie up as I went along. 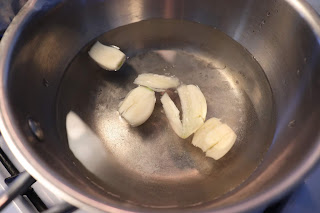 Bacon cut up and cooked in a pan.
Onions sliced, diced, and sautéed in olive oil until soft and transparent.

Rosemary and Parmesan cheese added to the dough for the crust. 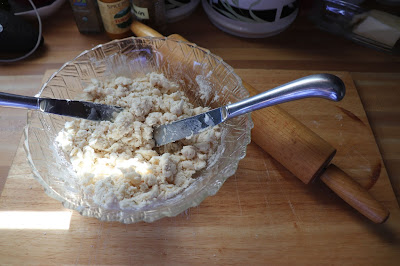 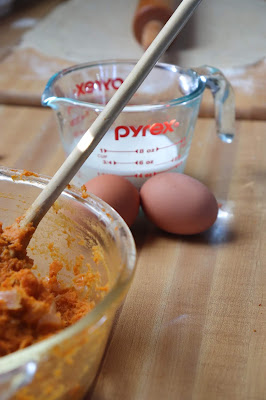 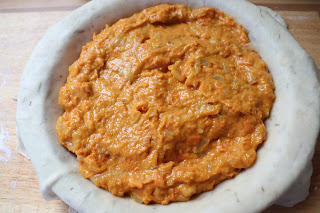 I chose to fold the crust over, rustic style, though there
was a bit much of it for that treatment. Once in the oven, it smelled heavenly. Six million dollar question: How would it turn out? 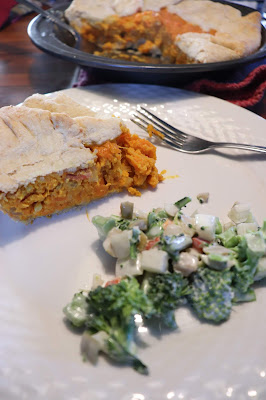 No kidding, if I had a restaurant, I would put this on the menu! And the pie server recently added to kitchen implements came in handy, too. Altogether, the project and results made for a very cheerful evening. 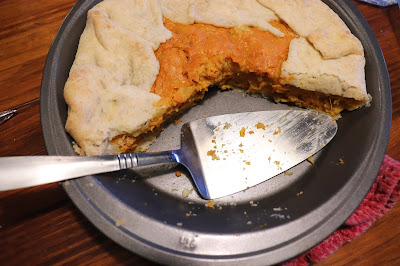