Start With a Blood Orange 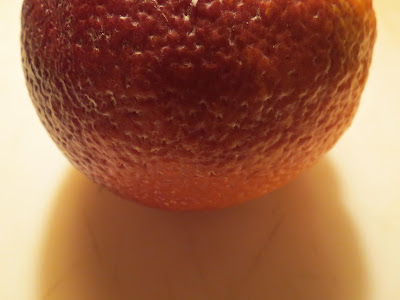 Blood oranges are not unique to Spain, but I always think of them as Spanish, from my first encountering them in Paris, and then I think also of strawberries and the protests from French farmers and agricultural workers one year over strawberries imported from Spain in what I thought of “The War of the Strawberries.” Oranges, of course, need a warmer climate than strawberries (and so we have Michigan strawberries but not Michigan oranges), but let’s stick to oranges today. Strawberries will come in good time.

Les sanguines. Blood oranges. The name is strong and yet poetic, evocative, calling up associations and mysteries far beyond citrus. 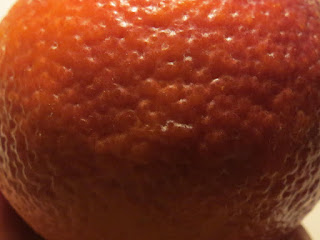 Blood orange fruit segments are a deep garnet in color (darker than Ruby Red grapefruit), and the thick orange rind surrounding the juicy pulp usually bears a deep red blush, too. They are delicious as well as beautiful, but it was the beauty and the magic of the name that first drew me to them. Some objects, like some places, simply have irresistible names, and if the objects are beautiful, too, why try to resist? 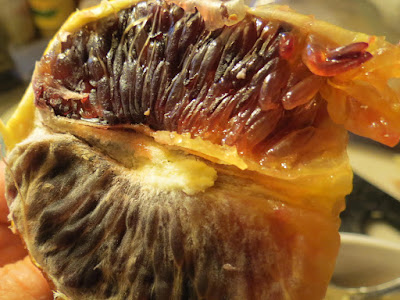 Now, to my amazement, blood oranges have come to Northport, where they are at present no more expensive than the more ordinary oranges. A dollar apiece for either kind! Cheaper than a candy bar! Too special, though, I can’t help thinking, to be merely sliced into sections for a snack. And a single blood orange goes a long way when used in a salad, half of one sufficient for two people’s salad. It dresses up mundane Romaine remarkably, along with some crumbled goat cheese and works well with a raspberry vinaigrette.

But a blood orange inspires me to go beyond lettuce and cheese, and so my salad the next evening began with cubed cold tofu and sections of blood orange cut into thirds, which would probably have been good enough; however, I had a bit of leftover fruit salad – orange and mango and grated coconut – so I tossed that in, too, along with freshly sprouted mung beans, finally dressing the whole and tossing with a light application of sesame oil.

That would have been the end of it, except that I also found the tiniest dab of chopped cabbage and kale to sprinkle over the top for bright green contrast and added crunch. Perfect!

What inspires you in the kitchen as spring comes on? Or do you find it too hard to stay indoors?