Quarantine Kitchen: A Sauce That Goes With Everything (Except Maybe Dessert)

I’ve decided not to number each dish or recipe or even each Quarantine Kitchen post individually. What if the numbers reached triple digits? That would be disheartening, wouldn’t it? So I’ll just go along from now on, one day at a time, combining more than one experiment into each post. Today, for example, I have to report one blazing success, one save, and one near-complete flop. I’d call that last a complete flop, except that my quarantine partner was happy with the results, and we did eat them. First, however, the success.

“What is it?” neighbor Therese asked during our walk with dogs, when I told her neighbor Dorothy had suggested I make a batch of chimichurri with parsley from her, Dorothy’s, greenhouse. I’d never heard of chimichurri before and was reminded of a song from the “Mary Poppins” (the movie) sung — well, performed — by Dick Van Dyke.

When you look up chimichurri, as I know you will and I encourage you to do, you’ll learn that it is an Argentinian sauce, used as often in Argentina as red and green salsa are here in the borderland, though it has more in common with Italian pesto. You’ll also quickly realize that there is great controversy about which ingredients may be included, which must be, and which would make any self-respecting Argentinian roll over in his or her grave. For instance, one recipe I read online got five stars and raves in the form of “I love this recipe!” from several readers, while others were outraged and said it was “not chimchurri at all!” 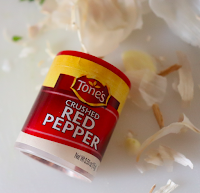 Maybe mine was "not chimchurri at all" — who am I to judge? — but I can tell you that we loved it! 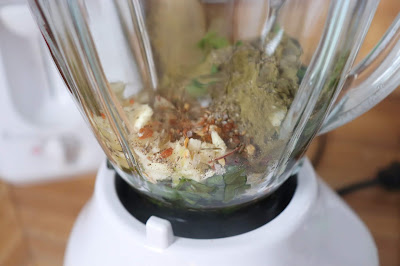 I have no food processor but am now possessed of a simple blender, and that would have to do. Chopped fresh parsley (1/4 cup), chopped garlic (4 big cloves), balsamic vinegar, salt, crushed red pepper, and oregano went into the blender.

Right from the start, though, I had to make adjustments in the basic recipe I'd chosen to follow: (1) With no red wine vinegar on hand, balsamic vinegar would have to do; however, it is a very strong-flavored vinegar, so (2) I reduced the three tablespoons to two tablespoons and added a tablespoon of water to make up the difference. Also, (3) as I had no oregano leaves but only ground oregano (oregano molido), I cut that amount in half as well. (4) Olive oil was to be added only when the parsley mixture went from food processor to bowl, but in my case, as it began in the blender I added some of the olive oil then and there, for the sake of consistency. 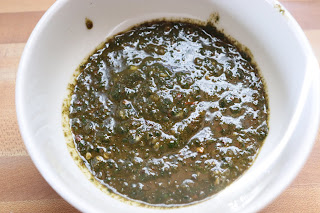 Getting all that in the bowl at last, I added the remainder of the olive oil, after which it had to sit 10 minutes before being stirred. The suspense was nerve-wracking! After stirring and a tiny, tentative taste, there was still the suspense of how the sauce would work to complement the evening’s chicken.


The photo at the top of the screen today is the final product.

I neglected to photograph the plated dinner but can report that the the sauce was delicious not only on the chicken but also on the sweet potato and steamed broccoli! And that the following evening it brought a fresh tomato salad to sparkling life! Dorothy tells me it’s good simply spread on bread, so there’s something we can try in the days ahead.

Chimichurri — resounding success in the quarantine kitchen and something that will spark up our meals for, I hope, many years to come! 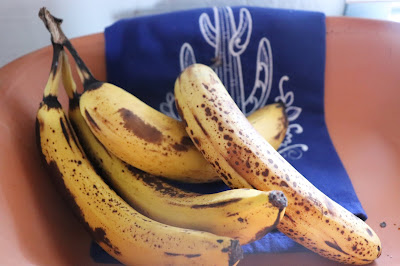 Something else, an experiment that was disappointing on the first day, turned around and became (surprisingly) glorious by the second. I had been preparing an entire post on bananas and how there’s more you can do with them than make banana bread. For example (and I have photographs for these), banana pancakes. For a more obvious example, fruit smoothies.

I make my own yogurt at home during the months my bookstore is closed, but one of the tricks of making yogurt is to avoid ultrapasturized milk. Sadly, the last time I shopped, all I could find was ultrapasteurized. What would happen? I tried and found out. The yogurt did not set up but had a runny, gooey, gluey consistency. Oh, well, I could put it on my granola, couldn’t I? And how could it hurt a fruit smoothie?

Substandard homemade yogurt, a couple of very ripe bananas, mango-coconut juice, a handful of blueberries and a handful of raspberries from the freezer all went into the blender. The result was drinkable. The taste was all right. The consistency, however, was disappointing. Not like a smoothie at all. My quarantine partner (known in my main blog as the Artist) turned down the offer of a disappointing smoothie, and I couldn’t blame him at all.

But waste not, want not. I am my grandmother’s daughter! Into the fridge it went. And lo and behold! The next day the consistency and texture had undergone a transformation! My smoothie (and it still tasted good) had become rich and thick and velvety smooth. Very satisfying!

I’ll note one more experiment but without a single image and without detailing the foolish improvisation I made that led to failure. The experiment was cheese popovers. Cheese popovers were one of my mother specialties, and for years someone has entreated me to make them for him. Okay, it felt like the time had come. We needed a treat. Long story short: they didn’t pop. I have figured out what I did wrong, though, and the next time will be a success — with pictures.

Thanks for visiting. Hope you are managing to enjoy a few experiments in your quarantine kitchen. -- I should say "sheltering-in-place kitchen" but the sound works better with the stronger word.