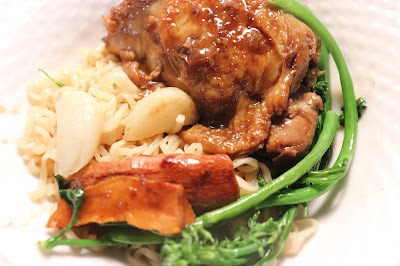 That's what we had for supper tonight, a simple, one-bowl meal of ramen topped with chicken slow-cooked in soy sauce and a few simple vegetables -- sweet potato, broccoli rabe, and garlic. The garlic went into the pan with the chicken, in a light splash of olive oil, before soy sauce or anything else. Garlic cloves cooked in their papery skins and only squeezed out of their coats when the meal was served. Easy and completely satisfying. I have become an unapologetic evangelist for garlic, especially roasted in its skin, either in a pan or in the oven. Just thinking of roasted garlic by itself, smeared on a slice of homemade bread, makes my mouth water. Try it!

Sunday's supper took more preparation, but some of the ingredients had been served up once already. The rice, for example, I'd cooked a couple of nights before, along with cubed beef, onions, and mushrooms in sour cream. So when a neighbor delivered tortillas and beans and uttered the magic words "bean burritos," I was ready to set up an assembly line. First rice in the middle of each tortilla, then beans (to which I'd added cumin and chili powder and my cooked beef cube mixture), then cheese. 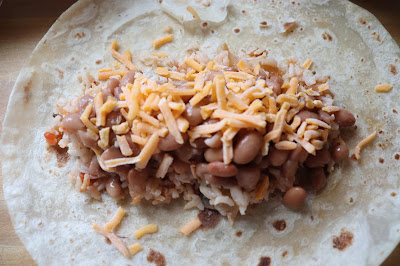 Next I wrapped the tortillas around the filling and arranged them in a re-usable and already much-used foil oven baking container, anointed them with salsa, and added more cheese on top. I was generous with the cheese. Dollops of sour cream I added only when about ten minutes of oven time remained.

And then, did I photograph the burritos as they came out of the oven? Or even as they were served on plates? I did not! I was too hungry to think of reaching for a camera, but here is the last one in the pan before attacked by a fork. It may not look like much, but I assure you it was delicious. 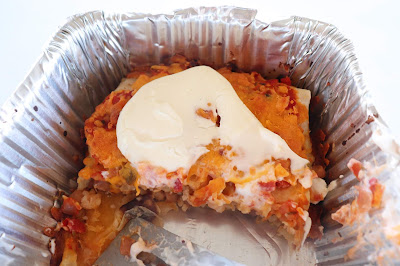 I believe two simple things made these burritos the best I've ever made, and both came from the neighbor. Beans. Tortillas. The beans were pinto beans, which we have come to love so much here in the Southwest that I don't think I'll ever go back to kidney beans again. Chili with rich, creamy pinto beans? You haven't had chili until you've tried it that way. And then, the tortillas. Back in Michigan, I only buy tortillas at NJ's Grocery in Lake Leelanau. The tortillas the neighbor brought us came from South Tucson, and taking them out of the package, I could tell immediately that they were superior to anything I'd found at Safeway. They looked and felt different -- thin and delicate, not at all rubbery (which is not a good feel for a tortilla). 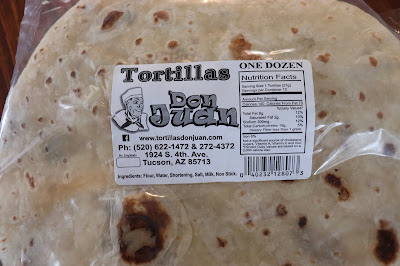 Simple ingredients. Garlic. Tortillas. Pinto Beans. Here are loaves of simple bread that went into the oven late Saturday, after the sun had gone down, to bake in the cool of the evening. Simple bread -- irregular loaves -- that made the house smell like a bakery all over again in the morning when sliced and toasted. 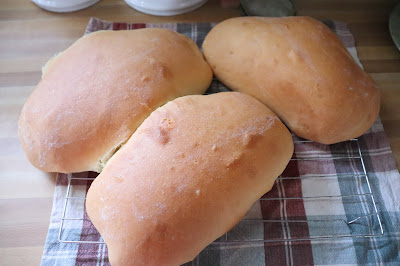 I'll close with one more simple thought: fresh mint. A few sprigs on the windowsill, plucked from an outdoor planter, add a touch of fresh green above the sink and are ready to serve as a plate garnish or to be chopped into another salad. Mint ... salad ... that reminds me, I need to put olives on the shopping list. I'm keeping those trips to a minimum these days. 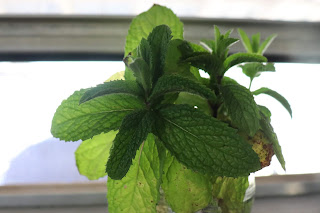 On the eve of Thanksgiving or Christmas, I like a simple supper like oyster stew or clam chowder – not a fast, certainly, but a meatless res... 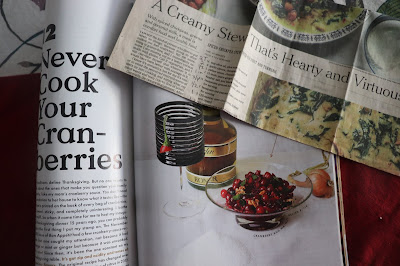