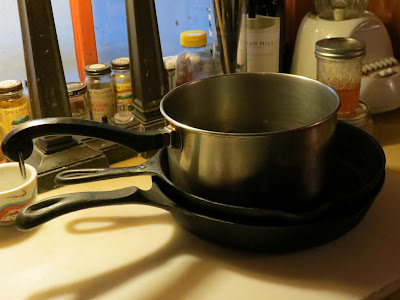 We spent New Year’s Eve quietly at home, watching a movie we’d seen a few years before, “Temple Grandin,” with Claire Danes in the lead role. It was every bit as wonderful as I remembered, if not more so. Moreover, this time around, in light of our three months in southeast Arizona in early 2015, the ranch and feedlot scenes with horses and cattle were familiar and set me to dreaming of the high desert, and after the movie David and I reminisced about Willcox (which I always call fondly “my little cow town,” to differentiate it from Dos Cabecas, “the ghost town” where we lived), wondering what had transpired with this or that residential or commercial building, fondly recalling coffee on the front porch at Beverly’s, and in my drowsy, go-to-sleep, after-midnight thoughts I “sang” myself a mental map of a lullaby, sketching in my mind the main arteries of Willcox and the roads leading north to Bonita and Safford and southeast to Dos Cabezas and Chiricahua and remembering the scenery along those familiar ways. We even woke to a sunny new day and year with Arizona thoughts still in our heads, finishing each other’s sentences as the listener immediately pictured the speaker’s subject.

So it was late morning on New Year’s Day before I turned my attention to my compact little northern Michigan Paris kitchen. We were going to a party in the neighborhood later in the day, and I planned to take, as I had the year before, a big casserole dish of hoppin’ john. Not a last-minute project but one that needs time to “get good,” as my grandmother used to say.

Full disclosure: Besides a single saucepan and two cast iron skillets, there was a rice cooker involved the night before. I’d decided make rice for our Chinese shrimp and vegetable dinner, with the idea that a big enough pot of rice would give me a head start on the next day’s hoppin’ john. My only problem was having failed to check the household rice supply first. Oops! Not enough for a very generous casserole on Sunday! And so, improvisation had to come to the rescue, as it so often must do, in kitchens of any size. Luckily, I had a goodly supply of the rice-like pasta called orzo and so, deciding that could be mixed with the rice as an extender, my first step of the morning was to set water to boil in a saucepan. 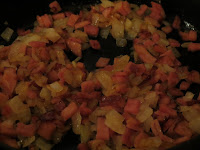 Second step was to dice a big onion; third, cube several slices of good ham; fourth, put first the onion in one iron skillet to sizzle in butter and olive oil and then add the ham to same.

Here’s where the second skillet comes into the story. I had intentionally cut up more onion and ham than the hoppin’ john would need, and now, in the second skillet, went diced redskin potatoes and sliced and diced red pepper for a good, hearty, New Year’s Day breakfast hash. 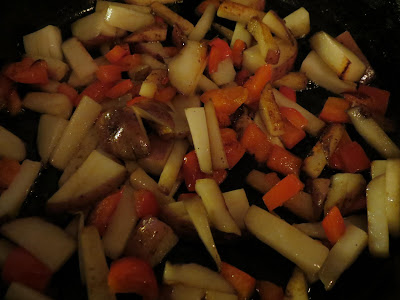 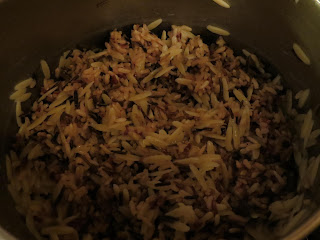 Orzo cooked, I drained that and mixed it in the saucepan with the rice. Time to add the black-eyed peas -- thinking fondly, as I always do in connection with black-eyed peas, of my maternal grandpa, my mother’s stepfather from Tallahassee, Florida – and a little chicken broth, too, so the rice and pasta and beans don’t get too dry.

This, by the way, is what I generally use for chicken broth in my little kitchen, and I didn’t start with dry peas, either: 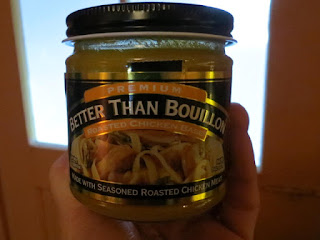 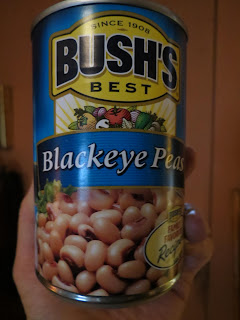 Little pieces of ham are getting nice and crisp. Potato cubes are browning nicely, too. Stirring and turning and taking deep breaths of the wonderful aromas, I am careful not to rush anything, but at last the moment comes to divide the cooked ham and onion, stirring about two-thirds of it into the potato and pepper mixture and the remaining third (along with a little more chicken broth) into the rice-orzo-bean mix. 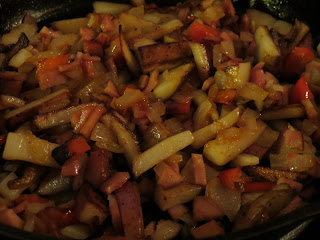 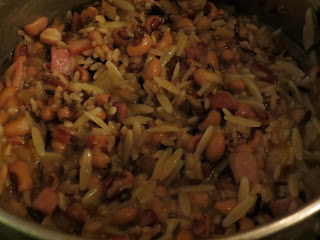 The finishing touch to the hash was to crack, very carefully, three eggs on top and then put a lid over the skillet so the eggs would cook through. They cooked to perfection! Like an illustration in a cookbook! But I must have been too excited about my rare achievement of perfection – and also, admittedly, nervous about getting hash and eggs from the pan without breaking the yolks, which turned out just fine, thanks – to photograph the hash and eggs, so you must just imagine that picture, as you must imagine, too, the final presentation of the hoppin’ john in its casserole dish, ready to go to a party.

A lot of people toward the end of December couldn’t wait for the year 2016 to be over. I wasn’t one of those people. I felt the new year looming like a dark cloud and was not at all eager to plunge into it. But I can say now, gratefully, that in our old farmhouse and our peaceful winter neighborhood, 2017 got off to a lovely start. I hope yours did, too.

The pan, or mold, is essential.   The essential baking pan with its shell-shaped creusees traveled with me from Michigan to Arizona in Novem... 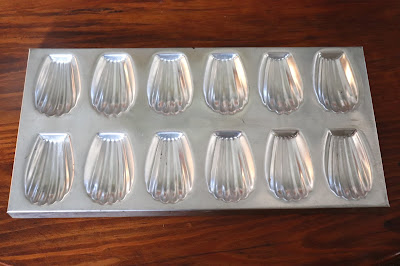